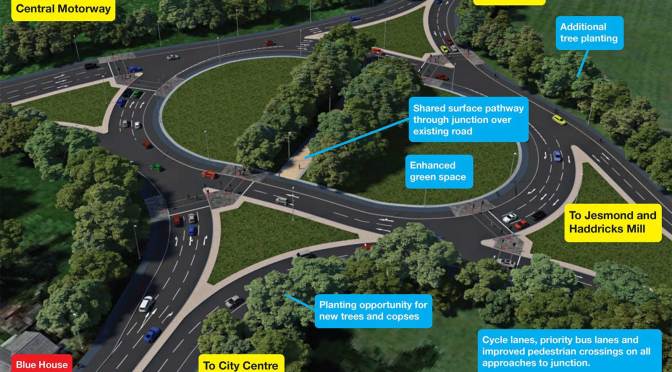 Newcastle City Council’s plans for the Blue House Roundabout are appalling and unnecessary.

I know the junction and have walked and driven across it more times than I can remember. The last thing it needs is what is proposed and I intend to do what I can to help stop the scheme.

There is already a significant body of local opposition to the proposals, for example:

“At present, it’s a busy, but functioning, junction occupying a particularly striking location – the intersection of two broad avenues of lime trees, some 130 years old, which cross the historic open spaces known as Duke’s Moor, Little Moor and the Town Moor. These spaces belong to the hereditary Freemen of Newcastle upon Tyne, who have been exercising their right to graze cattle here for a thousand years or so. They form a green belt around the city centre and make its inner suburbs surprisingly pastoral.”

Yet the more weight that can be brought against these unnecessary, expensive and car-centric proposals, the better.

Don’t let this nonsense be foisted any further. Take Newcastle forwards not backwards.

Avalon faces the risk of functional failure. The only way forward is to change.

Our infrastructure is inefficient. It needs to become efficient. This is not just a question of maintenance. There won’t be enough money to run the transport network, supply water, remove waste, provide broadband. Unless the city either shrinks to a size its current economic structures can afford; or grows to create a larger tax base – so long as the city can retain control over how that tax is spent.

The view of the infrastructure team is that Avalon should grow. But not off the back of its existing industries. These are running out of steam. The industrial infrastructure of the city needs to expand and to reinvigorate. Creative industries will be central to this.

A new population will come to Avalon. A younger population, joining the older, wiser and more experienced population that built the city’s wealth in the 20th century. Joining young people who, having grown up in Avalon have chosen to stay there rather than take the increasingly well-trodden path elsewhere. The city has seen too much of this. Its infrastructure of talent must be rebuilt.

And these people will need somewhere to live. Houses that are affordable. We need to build.

But this does not mean ever further sprawl into our precious countryside – which is too beautiful and too productive to become a building site. No, it means building on our existing urban footprint. We need to find space within the city, not outside. Some of our redundant industrial sites will provide excellent places for new housing: close to transport infrastructure, with excellent, ready-made supplies of water and power. We need to look hard at the vast city parks that were built many years ago and have simply not worked as they were intended – they have harboured crime rather than nurtured culture.

And culture is central to what we must do. Avalon needs to recapture the spirit in which it was first built: a pioneering spirit where anything was possible. Music, art, sculpture, performance: song and dance – we were good at it when we tried. The future memories of Avalon will be built on the strength of the cultural infrastructure that we put in place in the next few years.

And to achieve all of this we need to change the way that we make decisions in the city. No more top down dictats. We need a governance infrastructure that involves everyone: participatory planning, budgeting and decision-taking. An elected mayor for a start.
_____________

Transportation
– on ground
– above ground
– below ground.

Set in its ways.

No desire to change.

Reliant on the public sector.

Running out of time.

Risks
Functional failure
– not enough revenue to run the city.

Fragmentation
– in governance, leading to rivalry and underperformance.

Disenchantment
– no sense of belonging.

Disconnection
– of people from planning
– reinforced by physical remoteness of outlying centres.

Cultural sterility
– no fun
– no stimulation
– no sense of belonging.

Industry
– built around the creative industries
– attracting people from outside, not only serving existing population
– business development area
– enhance links to surrounding agriculture.

Designing City Resilience is a two-day summit at the RIBA, 17-18th June 2015. Avalon is one of four imaginary cities being looked at during the event in a creative approach that breaks the mould of typical, presentation-only conference agendas. By engaging in a rapid prototyping exercise, delegates immediately test the ideas they have heard in the keynote presentations and on-stage discussions. They also bring to the event their own international experiences.

The result is a two-way, creative conversation that produces a richer outcome: a set of designs for the transformation of the physical, spatial, environmental, industrial, educational, healthcare and governmental structures of the four cities. 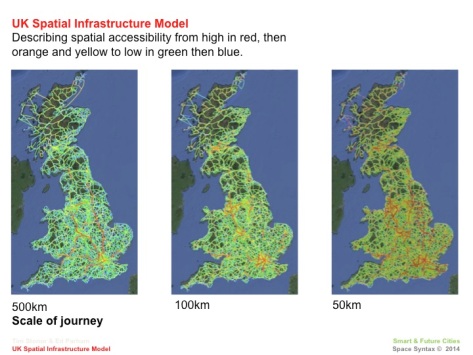 This is a model of the spatial infrastructure of Great Britain (and will soon include Northern Ireland to become a model of the United Kingdom). It allows us to zoom in and out on cities, towns and villages as well as the connections between them. It also lets us understand the hierarchy of connections at different scales – which routes are more important at a local, pedestrian scale and which are more important at a cross-country, car scale. More important routes are coloured red, then orange and green to less well connected routes in blue. END_OF_DOCUMENT_TOKEN_TO_BE_REPLACED

Stub…notes for an upcoming conference talk

Key issue to be addressed:

When a network of streets is laid out, planners and designers build in an enormous amount of “embedded potential”:

The design of the street network has a fundamental and measurable influence on each of the above.

Later changes – to land use pattern or to the local design of streets (eg road widening or narrowing, adding cycle lanes or public transport) – can enhance or even diminish these potentials, but such later changes always occur around a benchmark that is set by spatial configuration decisions.

Buildings come and go – are built and demolished – but the spatial network, once laid out, is harder to adjust.

Exceptional new connections – such as bridges – can be built to connect disconnected networks but grids are resilient to change. Therefore, putting the wrong grid into an urban development can be a pathological move, setting the socio-economic potential of places for generations to come.

How do we know this?

The evidence-base: post-war housing estates; UK New Towns. Places that go wrong within a generation, if that – sometimes within a few years. Car-dominant transport planning. Land use zoning.

In finding a balance between the tension of urban and rural development, Chinese towns and cities should learn from China first:

What are the Spatial Layout requirements?

This is not only a question of how they might look but also, and more importantly, about how they might be laid out as patterns of buildings and spatial connections.

Laying out a city means answering two key questions: “what goes where?” and the “how does it all connect together?” The answers to these questions have fundamental implications for the social, economic and environmental performance of urban places. And the jury is out as to which is the best way to do so: to use spatial planning to create place.

The global urban risk is that architects and planners have created, and continue to create, highly unsustainable city layouts – car dependent, socially divisive, congested and life-suppressing. And, it would seem, the more technologically advanced cities have become, the less efficiently they have worked.

By contrast, the street-based, continuously connected grid – the kind of layout that the slow, incremental evolution of cities produced before the intervention of modernism – has largely fallen out of fashion.

My argument in this piece is that the continuously connected grid is the only form of urban layout that can deliver sufficient social, economic and environmental value. The only kind of grid that is truly sustainable. END_OF_DOCUMENT_TOKEN_TO_BE_REPLACED

Notes from a meeting with the Beijing Institute of Agriculture and Forestry at Space Syntax London, 18th September 2013.

Waste
Avoidance of waste in both urban and rural settings. The rural landscape as the wastebasket of the urban landscape. Tension.