Tim Stonor speaks at the Building Research Establishment about his experience using data in the planning and design of buildings and urban settlements.

Speaking at the invitation of the organisers of the British Business Summit, Istanbul, Turkey. END_OF_DOCUMENT_TOKEN_TO_BE_REPLACED

Broadcast 26th August 2013 on BBC4, featuring Space Syntax analysis of Wren, Hook & Evelyn’s plans for rebuilding the City of London after the Great Fire of 1666.

“Using her skills to uncover long-forgotten and abandoned plans, architectural investigator Dr Olivia Horsfall Turner explores the fascinating and dramatic stories behind some of the grandest designs that were never built.

Destruction, whether intentional or circumstantial, often creates a clean slate and demands a fresh outlook in which we come to think the unthinkable. This programme looks at bold, and in some cases shocking, plans to make revolutionary changes to Britain’s biggest cities. END_OF_DOCUMENT_TOKEN_TO_BE_REPLACED

Here’s a summary of the visit on Storify.

My piece in full

Tim Stonor, Managing Director, Space Syntax
“The population of the world is increasing and, as it increases, more and more of us are living in cities. As cities have grown in the 20th century they have often grown to disconnect people.

Space Syntax has discovered that many of these problems in cities – disconnection, lack of contact between people, lack of access to jobs – come down to the way in which the city is planned as a layout of space.”

Ronan Faherty, Commercial Director, Land Securities
“As a developer, the most important thing for us is understanding the consumer and anything that assesses the consumer and helps us understand them provides real value. When you’re putting down a new property into an existing space we want to understand where consumers are coming from and then how they should engage with the property: where we should put escalation and movement and flows. END_OF_DOCUMENT_TOKEN_TO_BE_REPLACED 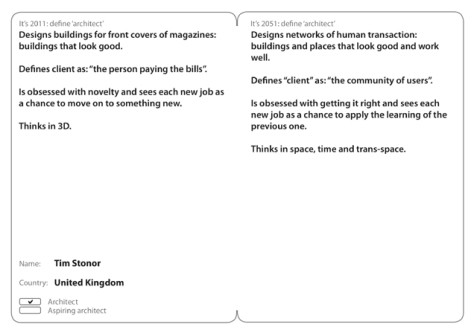 “The Architect: What now?” is an exhibition using debate, inks, film, sound and sculpture to explore the momentous identity change facing the architectural profession. Its aim is to encourage visitors to define / redefine the role of the architect and understand what this means for the construction industry.

I was delighted to be asked to participate.