The RIBA today launched a set of think-pieces on Digital planning: ideas to make it happen. 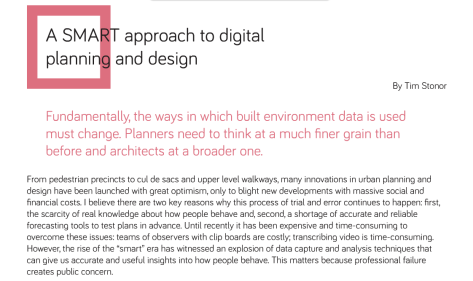 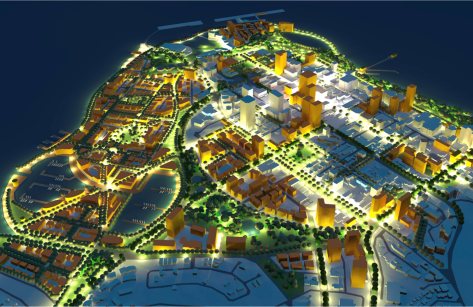 For too long, architects and urban planners have pursued the myth that human scale means “local” scale. In doing so, they have downscaled space, thinking that by fragmenting and disconnecting towns and cities into small enclaves they would be creating “community”. They were wrong.

Isolated and disconnected, people on inner -city housing estates, new towns and sprawling housing developments have found it hard to form social networks. To engage with the outside world. To be human.

And this form of urban planning prevails, being exported to developing cities worldwide.

In contrast, human scale is a combination of the local and the global, acting simultaneously on the individual. We are, unsurprisingly, more sophisticated than we were given credit for.

What do I mean? Well, consider having a doorstep conversation with a neighbour while watching the world go by on your street, or a coffee with a friend on the High Street. These are simultaneous local:global experiences.

Space Syntax analysis identifies the places where shops are most likely to locate in historic towns and cities. Using network models to study patterns of street connectivity, we find that shops are usually in locations that are simultaneously embedded in both local and global movement networks. Where everyday movement criss-crosses, be that local, short-distance movement or larger distance, global movement.

We call this “multi-scale” analysis and the places it identifies are multi-scale places.

Human behaviour is no mystery when the right kind of science is directed towards its understanding.

And the key finding for the creation of future urban settlement is that we need to think more globally. To connect more. To embrace the outside world more. To create more multi-scale places.

We need to see the human scale as a multi-scale phenomenon.

1.  Computing
That organisations and individuals are involved in the creation, collection, visualisation and analysis of data, leading to the creation, through computing, of modelling tools and predictive analytics. This kind of activity is now central to the operations of public and private organisations. It is no longer peripheral.

2.  Human behaviour
That people now think about places online as well as places on land; that cyberspace is as real as physical space; that networked computing means we have moved beyond the single chatroom and into the interconnected “place-web”.

These, I believe, are the twin aspects of Digital Urbanism and, of the two, the second is the primus inter pares because human behaviour patterns should drive computing activities.