Are streets the answer – yes, but…

Yesterday’s launch by think tank Policy Exchange of a report calling for the removal of inner-city high rise estates and their replacement with streets is a welcome contribution to discussions about the design of future cities. The report, authored by Create Streets, concludes that high rise estates are unsafe, antisocial and economically substandard. By proposing to replace estates with streets, the authors claim they are responding to residents’ concerns. They also say that well designed streets can provide just as much housing as sprawling estates.

The argument for street-based living appears to be straightforward: people like streets and they deliver economically. Yet it isn’t as simple as this and the report quite rightly references research by Savills, Space Syntax and the Brookings Institute that shows the importance of street layout. There are better, well-connected, well used streets and less good, disconnected, poorly used streets.

In delivering street-based schemes, many architects and urban designers have struggled to understand the difference, and continue to do so. Witness the labyrinthine sprawl at the edges of almost every UK town: estate after estate of wiggling streets that create car-dependency and damage social wellbeing, health and land values. Streets, but not the streets that the report calls for.

The key then is to connect and integrate. A comparison between two different street layouts shows that the consequences on real estate value alone are enormous: 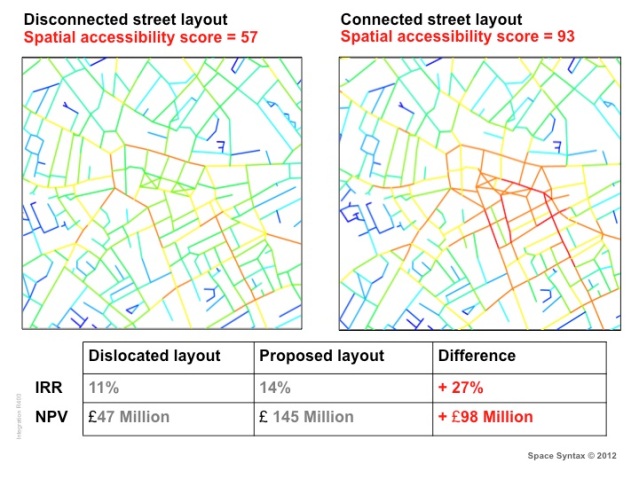 The street network of towns and cities is an urban asset, a piece of critical economic and social infrastructure in which hundreds of millions – in some cases billions – of value are embodied. If the findings of Savills, Space Syntax and the Brookings Institute can make it into Treasury calculations then the true value of streets will be understood and the well-reasoned arguments in the Create Streets report will stand a better chance of being enacted.

← Old Street – putting the genie back in the bottle?
HS2 – urban connectivity is key to maximising economic impact →

4 Comments on “Are streets the answer – yes, but…”